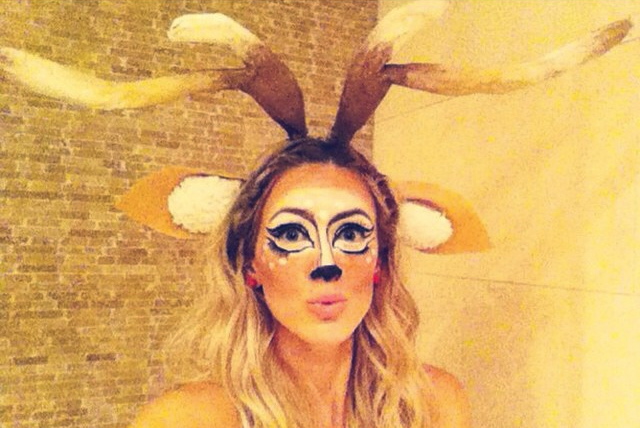 Yet another Halloween has come and gone!
I’ve always loved Halloween and going all out with costumes–this year was no exception! I typically like creating my own costumes opposed to buying them from a costume store.For this costume in particular I bought the deer onesie (which can be used again) The rest was all made by hand! You don’t have to spend a fortune to have a great costume, just an open mind and lots of creativity! I hope you enjoy!

To create a look similar to this one you can start with finding something to wear that is all brown. In my case, I lucked out and came across the perfect outfit. Because I started shopping around early for my costume, I was able to get a great deal on it, and that way I didn’t have to make the biggest part of this costume. I found my onesie at Bluenotes and got it on sale for $25.00! It’s almost next to impossible to find a costume for that cheap at a costume store these days! It was actually a Rudolph onesie that came with a hood complete with antlers and ears. I didn’t particularly like the hood and knew I was going to be making antlers of my own so I cut the whole hood right off. I saved the antlers and ears so I could use them somewhere else for my costume.

Start off with finding a top and bottom that are a similar shade of brown. If you aren’t able to find a onesie similar to mine, try matching brown tights, pants or a skirt to a long sleeve shirt. This onesie also came with pockets (as if it already couldn’t get any better!) I always make my costumes so I cheated a little bit here since the onesie I bought– but I wouldn’t be able to make something for that price.

Once I removed the hood, it was time to start the antlers! You could always go to the costume store and buy antlers, but I wanted to create ones that looked  more realistic than store-bought one. I used aluminium foil to create the shape and size that I wanted. Once I was happy with those I began making the paper mâché mix that I would use to cover the antlers with. I hadn’t made this mixture in years, but it’s as simple as 1 part flour to two parts water mixed in a large bowl. I then ripped newspaper into long and thin strips. Next, dunk the strips into the mix remembering to run your finger down the strip to remove excess paper mâché. Begin placing it on the aluminum foil antlers making sure to mould it to the shape you had originally created. I did about two coats of this until it was smooth and no aluminum foil was left showing. You can dip your finger in the mixture and place it onto the placed newspaper so that the pieces stay nice and smooth (makes for easier painting.) When they are fully complete, place them on a drying rack before beginning to paint. I did these the night before and waited until the morning to paint them.

I decided to paint the antlers three different colours to get the look I wanted. I used a beige colour first,and painted two thin coats over the entire thing. I then used a light brown and white until they started looking realistic. I placed this to the side and let them dry as I worked on the headband that they would eventually go on.

I made my own ears out of light brown felt that I cut into large shaped ears (deers have big ears!) My mom sewed them onto the headband along with the fuzzy ears from the hood placing them inside the ones I made. This ended up working out great because the inside of the ears matched perfectly with the tummy. She then stiched these onto the headband and I painted the headband in the same beige colour previously used.. You can use any headband you want as long as it’s about half an inch or more thick. Don’t use a plastic headband as you will find it hard to attach the antlers to this. I made mine so big they were pretty heavy, I ended up having to get my dad to drill them right into the headband (crazy, I know!) After letting the antlers dry completely my dad bolted the antlers into the headband so they wouldn’t fall over or spin. I was extremely happy with how they turned out and it really made the costume come to life!

While my dad was working away on attaching the antlers I cut out some dots that I wanted to stick on the back of the onesie to make the spots. I bought an 8 1/2 X 11 inch sheet of felt from Fabricland (on sale for $1.00.) What was great about this felt was that it was sticky at the back so once I had cut out all the dots all I had to do was peal back the sticker and place them on the onesie. I opted for two different sizes of dots and started at the top of the onesie and went right down to the tail. Using the leftover material from one of the antlers on the hoodie my mom cut that off and sewed that onto the tail (I had to have the classic white fluffy deer tail.)

Now that the costume was complete it was time to start the fun part– the make-up! I had Googled, pinned, and watched YouTube videos on how others created the deer makeup. I found one that I really liked and her tutorial was really simple to follow. I have provided this video tutorial below. I didn’t make a video of me doing the makeup but I did take progress pictures throughout!

The final touches… I parted my hair down the center and did two one-inch thick french braids at the side. I completed the look with painting old faux-pearls bright red and dipped them in red sparkles to make them look like berries!

Time to get back to the drawing board for next year’s costume!